Hillary, was it a hot flash that caused you to lose your cool?
I had the best laugh watching that clip. That snap had to be the result of a hot flash. It was truly so out of character for Hillary. I'm just sayin'...a hot flash will make you want to slap somebody. They come on suddenly.There is no way out of it. You may exhibit unusual behavior and say strange things. One minute you're happy, smiling and in a "flash", there it is. I'm just sayin'...they can really mess with your attitude. MPW's (menopausal women), can you feel me on this one? Honestly, didn't she have that hot flash look on her face?

Congratulations to U.S. Supreme Court Justice Sonia Sotomayor! I'm just sayin'...you gotta love it! It's hard to believe that there was a time when women were not even allowed to vote, let alone hold such a prominent political office. We really have come a long way, Baby! Ole'!!!

People are so furious over the health care reform issues...all that 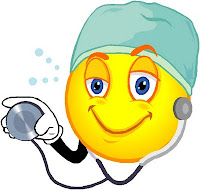 rage, screaming and yelling ...I'm just sayin'...some of them won't have to worry about health care because they are going to give themselves a doggone fatal heart attack! For goodness sake, take a chill pill for now and let's see how everything shakes out in the morning.