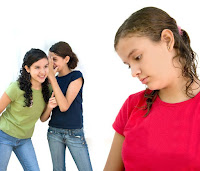 BULLYING: Close Encounters of the Worst Kind
I was bullied as a kid. When I think about it now, the number of times that I was intimidated by this individual, and the number years it continued, I get downright mad knowing that no way under heaven could anything remotely close to that ever happen to me now. It's baffling that it did happen, and it's still happening to boys, girls, men and women. It needs to stop.

Back then, from kindergarten though the 7th grade, many of us had to endure the evilness and anger of a horrific little girl named Charlotte. She threatened us, took our milk money and picked fights with us constantly. She literally had every kid pretty terrified of her, so we would succumb to her aggression, accommodating her demands or risk getting beaten up. I ask myself now how could another child be so overpowering and so successful at bullying at age five? The answer: she was truly troubled.

Charlotte would come to school day after day with uncombed hair, a dirty face and a disgusting snotty, runny nose. She smelled horrible, and her clothing was never clean or neat. It seemed that she was left on her own to get ready for school, and it definitely showed. Her shoes were never tied and the buttons on her blouses were never buttoned correctly. She was an angry kid, and she hated most of us, and let us know it. Whatever was going on at home was bad, and whatever was going on in her head was even worse.

Getting into trouble for her antics never slowed down any of her actions though. She was just as ready to take our money the next day as she was the day before, along with a punch or two sometimes to let us know she meant business. Too many days I had to figure out how to have milk money for me and Charlotte. I would ask my Daddy for candy money often so I could buy her milk and cookies for the week. He would often give me money for just being a good kid, so whenever this little devil came threatening to beat me up if I didn't hand over some money, I had some to give her.

Others encountered the same treatment. I wasn't the only one being bullied. When we got a little older, she wanted more than money. If she liked something we wore, she demanded to have it . Some of the girls did give her their stuff very unwillingly. I told her "my mother said no" to that request. Actually, my mother integrated a few profanities into her response when I told her about it, but I knew she didn't expect that I would say that to Charlotte. My mother just wanted me to stand up for myself, and one day she had this idea that she would teach me how.

I was in the third grade by this time, and Charlotte was still as terrible and terrifying as ever. One day, I came home crying after she decided she would try to take my coat. My mother was furious about it. She told me in no uncertain terms that I was to go back to school the next day and "mop up the streets with Charlotte." Yeah, right. I was shaking in my boots, but I was riding high on my mother's words and went to school the next day bragging about how I was going to mop up the streets with Charlotte after school. My real plan was to jet out of there at three o'clock like an Olympic runner, hopefully not encountering Charlotte at all.

When the bell rang at three, I went with plan B and ran as fast as I could towards home. I was about fifty feet from my house, and feeling somewhat relieved when out of nowhere came Charlotte, screaming like a banshee, "Mop up the streets with me! Mop up the streets with me!" Then she smacked me in the back of my head. I fell down, but got up quickly and ran from this crazed, maniac child. So much for my mother's advice. She had no real idea what we were dealing with. However, eventually, my parents ended up coming to the school. The bullying did stop for a while after that, but only for a while.

By sixth grade, Charlotte had a posse. What threats and terror she did not commit herself, she would send one of her other fiends to do. Unfortunately, this nonsense carried on until the seventh grade, until I realized that it was time I did something to stop it.

When one of "them", Linda, had passed the word that she was going to beat me up after school, I knew then and there this would be the very last time I would allow myself to be subject to this unfair, unjustified and ignorant treatment. This was the day there would be a showdown. I was done with getting beaten up. I was tired of giving them my money. I was just plain tired of being a pushover. I was becoming a young lady and I was beginning to feel a little more grown up. My mother let me stop wearing pigtails when I got to the seventh grade, so I was "styling" a little bit by now. I thought to myself, "I am not going to let them make me look stupid anymore. I'm getting too big for this now. I have to fight this time."

After school, all the kids knew about the upcoming fight and they congregated, screaming and cheering Linda on. I had no fans, no support, except myself. Linda came up close behind me as I was walking home and pushed me, which was the "typical" indication that the fight was on. I turned around and looked at Linda, snatched her by her hair and gave her the beat down of her little life. Yeah, Linda, unfortunately, got beat up for every time that anybody had threatened or intimidated me. She was a mess, shaken, startled, scared, limping and crying. I knew I would have no more problems with her. Over, done, in one round.

Still, no cheers for me, just awe, but you will never guess what happened next. Charlotte came over to me as I was dusting myself off. She put her arm around my shoulder and said, "I didn't know you could fight like that." If I hadn't known she had already lost her mind a long time ago, I thought for sure she had now. I threw her arm off my shoulder and said, "and don't you forget it." I picked up my books, and strutted off as if to say anybody's butt was mine if they were bad enough to try me. I had new found respect that day. More importantly, my self-esteem was restored. My confidence was strong. No, I was no longer a wimp. I was worthy. Hear me roar!

Honestly, I am not proud of this story. I am sorry I experienced this trauma, and I am sorry for anyone who does. No one should be subject to the terrorizing, threats and fights that I went through. Bullying is no joke. It's awful. You feel hurt, scared and insecure all the time. You don't understand why it's happening and you don't really know what to do about it. You get teased and laughed at, which complicates the other feelings you're dealing with. It was a good thing that my parents started paying closer attention and stepped in. It was even better when I stepped up, not because I wanted to fight. I didn't. All I wanted was my self-esteem back, and I got it. And, yes, I have a new attitude about taking any kind of bull, anytime or anywhere.

If you or someone you know is the target of bullying or abuse of any kind, let someone know who can intervene safely. These circumstances can vary greatly from individual to individual, however, the need to stop the abuse is essential. Show that person your concern by saying that you care, by stepping in and helping to end these senseless encounters. Sometimes all it takes is someone to show up and step up.