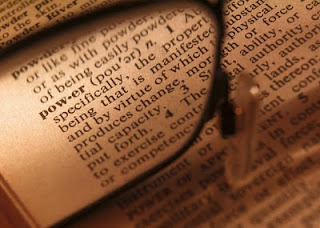 Are You Concerned About The Size of Your "P-Ness"?
O.K., now that I have your attention, let me make this disclaimer: "P-Ness" is not meant to be gender specific or sexually defining in any way. Any such perception in incorrect. It's just a play on words to make a point.

Anyway, in this case, here's a working definition for you: the "P-Ness" I'm referring to is "an individual's personal or professional POWER, perceived, earned or otherwise."

POWER CAN BE A STRANGE THING
People want power, or at least, to feel powerful. We desire positions of respect and achievement and of course, it's healthy to feel that. We want to feel that we have accomplished something in life, or feel that we've made an impact in the world or to others around us. That's well-rounded thinking, too. Those things heighten our sense of having personal and professional power, and having that power is a good thing when you understand how to utilize it. However, sometimes strange things can happen when we get it. Even stranger things can happen when you don't. And, it gets really bizarre when you're about to lose it.

Consider a few scenarios, like Charlie Sheen, for instance. Sadly, Charlie thinks of his "P-ness " as really big, bigger than the people who made him powerful. But, you know what they say, the bigger they are...

And, what about these foreign leaders? Apparently the size of their "P-ness" has gone to their heads. Their egos far outweigh any sensible measure of what power really means and how it should be used. Enough already. Even as I write this, CNN is reporting "HEADLINE NEWS: Gudhafi Clings to Power." Still clinging...geeeeeez. Let it go already.

Then you have the old "perception is reality" theory. There are all manner of crooks who feel the need to show their "P-ness" to the world. They break the laws, steal money, identities, live fake, luxurious existences just to "appear" powerful. It's crazy, I say. Just plain crazy. I think most of could say that we really don't care how big their yachts are.

MEASURE FOR MEASURE
Yes, when the desire for power is unhealthy, it's crazy. Thank God that most of us are not like the guys I mentioned, but the real deal is that the tendency to measure your power, or "P-ness" against others is everywhere. We need to feel important, valued and significant, but things happen like losing jobs, businesses, relationships, money and suddenly we can feel zapped of our power.

Those summations about ourselves can be a very bad thing. We certainly recognize success when we see it, but a true measure of success can also be only relative to our very own circumstances. For some, if you made it out of difficult circumstances and survived, got a good education and a good paying job, that's success. For others, if your small business made it to Wall Street, that's success. There are many great examples of how to measure success, depending on who you are and where you came from.

THE TRUTH ABOUT YOUR "P-NESS"
When we make inaccurate comparisons consciously and unconsciously, those wrong summations can stir anger, envy and distorted feelings within us. It disturbs us when we feel "inadequate", especially if we think we could've, would've and should've been more powerful than the other person.

The truth of the matter is that other people are constantly out-performing each other in some way or another. Some people have higher IQ's, are more gifted and simply more tenacious than others, and that's O.K. This doesn't mean that we can't get what those optimum performers get out of life. It's HOW YOU USE the power YOU possess for your greater good, and maybe at the same time for the greater good of others, too, that matters most. All of us will go about getting to our greatness-es differently. That's the beauty of personal power when it is measured in a healthy way. When it isn't, though, look out. It's a beast. When those perspectives of someone else being "more than me" infiltrate our rational thinking, it means trouble. It can feel ugly. It can also act ugly.

For instance, what about all of the Presidential bashing that goes on? It's ways are so brutal. I understand that all Presidents are targets of this kind of "professional bullying". I know that it's a part of the whole political game that allows hitting below the belt, but I'm still amazed at the number of "hopefuls" and media "opinionists" and other critics that have such venomous things to say about President Obama. Do you suppose that maybe it's envy of the strange and worst kind manifesting itself?

One day Obama is just a "somebody", wanting to make a difference, and then he's POTUS. It seemed to happen lightning fast, and if you happen to be of "those" with such huge aspirations as that, you may be wondering how he was smart enough to do it. It was almost magical, and, perhaps, that has been the problem with the pondering critics asking, how did he do that right before our very eyes? There were no tricks, however. No optical illusion here, but much like magic, it was quick. We blinked, and he became President.

Yes, it was achieved with the kind of quickness that might leave you feeling a bit "less than", or questioning yourself, your intentions, your abilities, and the size of your "P-Ness", and, again, much like magic, it has you still trying to figure out how he did it. My suggestion is just don't make a comparison here.

SIZE MATTERS TO SOME PEOPLE
Really? Consider the other sneaky, little ways in which the desire for power shows up in our everyday lives. Have you experienced someone who just has to out-do you? Or, when a person feels the need to cut in front of you in traffic? Or, when someone turns their nose up at you, and you have no idea why? Or, someone at work needs to get the credit for your hard work? Or, when people are jealous about your car, your house, your clothes, your career, your life? The list goes on. It's crazy, but it's real. They get upset if the size of our power seems greater than theirs, be it real or imagined.

So, what's my point? As I said, POWER can be a STRANGE THING. We have to deal with the fact that some people know how to get things done in truly amazing ways, more so than others. Some individuals are formidable, powerful forces to be reckoned with. Others walk softly, and carry a big, equally powerful but quiet personal confidence into their tasks. Others get there by "staying the course", no bells or whistles, no need for attention. It's still power. WE ALL HAVE IT IN VARYING DEGREES.

At the end of the day, what does it all mean? For people like Charlie Sheen, those egotistical leaders, all of the crazy crooks, critics, and the people that think it's really cool and powerful to cut us off in traffic, it means this, ladies and gentlemen: some people will have a bigger "P-Ness" than others. It doesn't pay to be mad, bashing or among the "haters" because your "P-ness" is small, or if it appears that you have no "P-ness" at all.

I'm just sayin'...try not to be overly concerned. Use THE POWER YOU HAVE in better and greater ways, because YOU CAN.