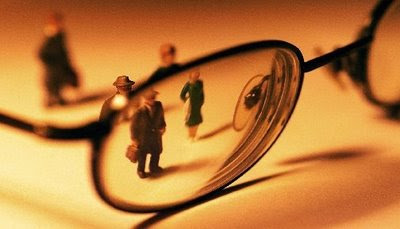 I Was Blind, But Now I See
You've heard the old saying that "hindsight is twenty-twenty." Most of us would have to admit that as we look back over past blunders, bad choices we've made and wrong turns we took, we can see very clearly, now, what we did not then. We see with crystal clarity what we could have done or should have done: "if only" I had done "this or that" it would have prevented "the other". We see that "something" often regretfully, disappointed that it resulted in the unwanted way that it did. Ever wonder why we seemed completely blind to it then, and the consequences?
Is it because we really did not focus and did not see what we needed to see at the time? What was the reason that we didn't know the right way of looking at things in the first place? Is it because we take such blind leaps of faith, and our mental and emotional eyes don't focus until we've failed?
Why do we take blind steps without figuring out that we better check to see where or what we are headed into? Do you think that if we would try to develop keener insights, better observations of situations, and be more "microscopic" about our affairs, that maybe we could be less likely to make so many mistakes? Maybe we would not have so many regrets?
The Answers Aren't So Easy
As impatient as we are about most things, it's no wonder that we don't always think things over and over as well as we should. We often want what we want, and we want it NOW! Instant gratification: we feel that the sooner we get whatever it is, the better.
How many of us find out that sooner isn't always better, that "now" often makes us pay later? Sometimes it even looks like if a desirable thing is right in front of us, then it must be O.K. to have it. Hindsight tell us that this is not necessarily so.
We have gone into relationships, ventures, friendships, partnerships, and other risky matters with optimum optimism only to find out later that we made a bad move. Too late to turn back the wheels and get your money back, to get your love back, to recoup your pride, re-gain your self-esteem. After the dusting off, we take an "educated" look back and say, "if onIy I had known then what I know now."
Look Back, But Don't Look Long
Certainly our past mistakes can teach us so much. We should reflect, re-visit and use what we learned to rebuild the future. We should look, yes, but dwell on those mistakes? NO! So, look, YES! Look long, NO! Look at those mistakes only long enough to analyze what went wrong, and when you figure it out, lock it in so that you don't do it again.
We can avoid some of the trial and trauma that we bring upon ourselves. We can stop tripping and falling over bad decisions. We can stop creating regret. Of course there is always a measure of uncertainty, outcomes that we can't anticipate, and interesting twists and turns that appear along our paths. However, there is a simple strategy that can help us with the many decisions and choices that we have to make. We can take easier paths and avoid the nasty falls. How?
FOXOLOGY says: First, check your vision. Use foresight. Analyze. Stop and think. Then think twice. Then think again. Then think again, and think again. Hindsight may be twenty-twenty, however, by practicing "seeing" ahead, maybe you won't have you worry so much about looking back.